The U14’s sevens team can be very proud of putting on an excellent performance getting to the Quarter finals at the Kent Schools Festival. The weather was bright and sunny and the pitches at Dartford College were in great condition. Cranbrook got off to a superb start running in 5 tries to beat Kings School Canterbury in their opening pool match 27-5. The performance was hard to believe considering the squad had had only had 1 training session all together beforehand and for most this was their first ever sevens rugby. Tries were had by Ola Oloko , Nathan Fisho, Cody Walsh, Wedge, and Ed Morgan and a drop goal conversion by Archie Parsons. Next up were Chis & Sid who had gone down 5 tries to nil in their first match to Judd and looked very beatable. Cranbrook mistakenly went into the game with a ‘we’ll easily win this’ attitude (and possibly too many snacks from Baxter’s sweet emporium) and found themselves 2 tries down at half time with a real challenge on their hands. Fantastic tries though from Ollie Doubell and Cody drew Cranbrook level and a sweetly struck goal kick conversion from Ed put Cranbrook in the lead by 2 points with 1 minute to go. Chis & Sid received and somehow their rapid winger got the ball and managed to pass 3 Cranbrook tacklers and touch down taking the lead back. Unbelievable! The final 30 seconds saw Chis & Sid score another. A devastating 12-20 loss for the Cranbrook team! 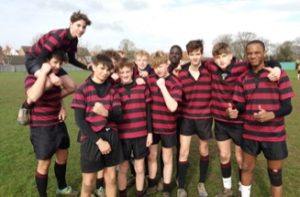 However, lessons in ‘not to be complacent’ learnt, their final pool match saw them play superbly against the tournament’s eventual champions, Judd. Despite losing 0-17, 3 tries to nil, Cranbrook made Judd work hard for each score and came close themselves several times. It was then down to Chis & Sid v Kings to see which team went through to the QF’s. Cranbrook lined the touchline cheering on Kings and in a thrilling match Kings beat Chis & Sid meaning three teams now had 1 win and 2 losses – it would be tries scored as to who went through. A tense 10 mins passed and then the team got the great news, they were through to the Q Finals against Ravens Wood!

Ravens Wood were a quality team at 15’s getting to the County Final so the Cranbrook team warmed up well and were fully pumped up for the match. An Archie try got Cranbrook off to a great start and at half time it was 1 try each and nothing in it. In the 2nd half possession swung between the teams but the strong Ravens Wood side nudged ahead with a 2nd try to take them 12-5 up. Cranbrook came close but Ravenswood held on to the final whistle. The eventual final was between Judd and Ravens Wood, Judd won. So, Cranbrook played the best sevens teams in the county and ran them close, a splendid performance and great signs for the future. Macdonald’s stop on the way back to school was fully deserved. Very well done everyone from Mr Hillier and Mr Knight.

Unfortunately, the tournament was cut short by the torrential rain and the pitches becoming unplayable. However, the Cranbrook U15 team managed to get in 3 out of their 4 pool matches before everything was abandoned and put in a very solid showing. The first match was against Colfes and Cranbrook played their best rugby of the day with great tries from Dayo Oyerinde and Fred Hamlyn and a converted drop goal from Wilf Quinlan. Playing conditions were very tough on the steeply sloping, already boggy, pitch and icy cold rain and wind but Cranbrook showed some quality rugby. Support play was excellent and they fully deserved the 12-5 win. 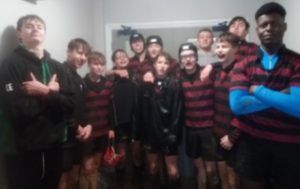 Next up was a much tougher Langley Park side with some big, physical players. Cranbrook played really well and matched the opposition for most of the game but Langley Park just had the upper hand and scored twice. Cranbrook fought 1 try back through Dayo but it wasn’t quite enough and the score stayed 12-5. By now the conditions were worsening and without any nice warm changing rooms to take shelter from the freezing wind and rain Cranbrook huddled in a building entrance for cover but with injuries to Tom Landry (back) and Tom West (frozen fingers) the boys enthusiasm for the next match understandably was disappearing fast.

Hayes School were next and were just more ‘up for it’. They won quite easily 20-0. The organisers then announced the tournament couldn’t continue and with cheers from the players we ran back to the minibus and departed to warm up and dry up in McDonald’s. The tournament might be re-run but if not Cranbrook U15’s can be proud they put in two great performances. 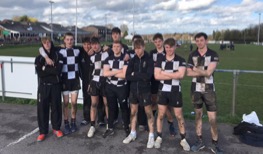 The U18s sevens squad enjoyed rare day of sunny weather at the picturesque Gravesend Rugby Club for annual Kent Rugby Sevens Tournament. Although training time had been hard to come by due to the squad being predominantly made up of hockey players, the boys can be very proud of some solid performances. The team started fast out of the blocks with a hard-fought win over Hayes School. Accuracy and patience in defence led to turnover opportunities, and with that, space to attack. The next two matches against Rochester Maths and Gravesend Grammar resulted in two rare draws. They boys were unlucky to lose grip on two early leads. A loss against Maidstone Grammar in the final pool game saw Cranbrook finish 2nd in their group and progress through to the Plate Semi Finals against a strong Ravenswood side. Through no lack of effort and character, a tired Cranbrook squad finally succumbed to the physical exertions of the day. Ravenswood were convincing and worthy winners on this occasion. Special mentions must go to Percy Christopherson for his reliability and leadership on the pitch. The boys represented the school admirably and provided a fitting conclusion to this year’s rugby calendar.