What would you put in a time capsule?

Most people said that they would put in money and a form of technology in their time capsule as these sorts of things change and it would fascinate people in the future, although a year 10 student stated that he would put money in his capsule so that he could make profit from it in the future. Some students and teachers would include books, written letters and diaries, as they can tell you a lot about the time they were written. Plastic was also something that came up as we are currently trying to reduce this so people in the future may not know what plastic is. One teacher said that he would put a student in the time capsule so that future people could understand what people were like. 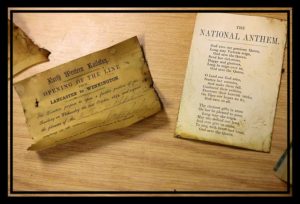 Moving on to the next question about what they would expect to find in a capsule from 500 years ago. Both teachers and students said that they would expect to find armour and weapons from wars as people would want to show future generations how they lived. On the theme of showing people how they lived, people expected to find diaries and bibles as people were very religious then. People also expected to find books and quills as they were the sorts of things commonly used. The majority of people we asked expected to find some sort of text based item or a kind of weapon used in war.

Overall people chose things to represent how we lived or how people lived in the past. They showed the technology we used and what is important for people in the future to know to help work out how we lived.