Cranbrook town was unable to hold its traditional Remembrance service or formal act of Remembrance at the war memorial this year due to current Covid restrictions. Cranbrook School was honoured to host a small, outdoor and socially distanced act of Remembrance on behalf of the entire community. Representatives of local community groups and the armed services laid their customary wreaths against the arch of the Sixth Form Centre, beneath the School’s crest and war memorial. The site of this unconventional service, 75 years after VE Day, was particularly poignant given that the Sixth Form Centre was originally built as a gymnasium and also a memorial to the alumni and master who gave their lives in the Second World War.

Cranbrook’s cadets were represented by Colour Sergeant Roberts, Sergeant Latham and Sergeant Harper who carried the Combined Cadet Force colours and laid them on a drum altar during the two-minute silence. 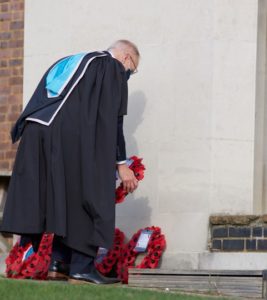 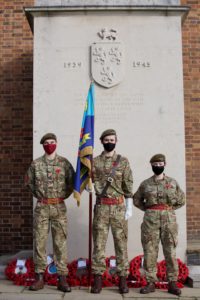 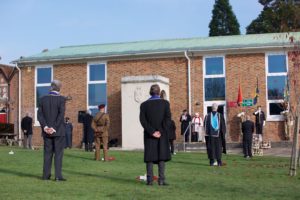