An enthusiastic group of girls all keen to play and improve their skills.  Attendance at training on Thursday nights has been excellent from the majority of A and B team players and both individual and team progress has been made.  Competition has been tough, but the girls have always tried their best and improved their play each quarter which is all we can ask.

Building on the progress made last season both the U13A and U13B team have enjoyed a mixed bag of wins and losses. The U13A have gelled well and been a tight team of 7.  The many girls wishing to play in the U13B have all been given opportunities and have been unfortunate to mostly face much taller and robust opposition. 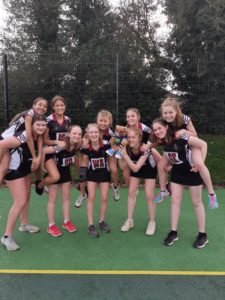 The U14A have the second highest win rate of the school.  Played 9, Won 6, Drew 1, Lost only 2.  Miss Scott has really enjoyed coaching this delightful group of girls and has provided stimulating and well thought sessions to help them develop as individuals and as a team. Miss Scott voted the following achievements at the end of the season.

Special mention to Chloe Jones who has been voted player of the match by the opposition most weeks demonstrating her advanced skills.  She has balanced school, club and county commitments admirably. Chloe also helped at U12/U13 practice after school which we thank her for.

The U14B did not fare so well in terms of results but have much potential and due to that there has been quite a bit of movement between teams. Evie Langham and Hazel Roderick moved to the A squad after a couple of outstanding games for the B team and Alanis Nwadire was invited to join the A team towards the end of the season for the Kings tournament.

U14C also saw movement of players and Elsa Williams Osborne (MIP) played for both the C and B team as an excellent and reliable shooter.  Sophie Lock was also a reliable shooter and gained MVP for being reliable, committed and adaptable to a change in position on the court as required.

Special mention must go to all the Spanish boarders who attended practice religiously and learnt a new game for them very quickly.  They all played matches as representatives of the D and C teams and even for Olga Garcia Calvo a spot in the U14B’s. 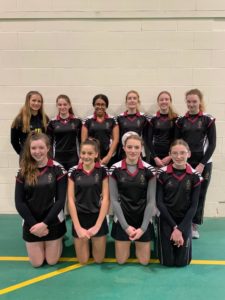 It is fair to say that I hit the jackpot this year for the U15A when recruited their coach Miss Durr.  Being a stalwart hockey group of girls and after a tough netball season in Year 9 I knew that the right leadership would be key.  Miss Durr and the girls very quickly gelled, and they valued her youth, work ethic and knowledge of the game.  They have been totally committed and although there have been many frustrating losses, they have learnt more every game and become stronger and tighter as a team and will reap the benefits in future seasons.

The U15B team took a little longer to settle but once a regular team was established, they started to gel and made steady progress throughout the season. Their effort and commitment could not be faulted but wins were, it has to be said, hard to come by.

The U15C team varied but every player was committed and keen to play whenever they could.  Amaris Ilamah Henry made progress into the B’s so gains MIP for the C team.  MVP is a difficult one to award as only 2 matches played sadly due to weather and Covid-19; however, we would also like to award an additional MIP to Chloe Wong for her commitment to training and progress this season.

U16’s/2nd’s and 1st train together and with four teams this can sometimes be a juggle in the sports hall, but the girls always work hard and are without exception always a pleasure to coach. The level of play for the U16 is always advanced by playing with the older years.

Apart from Ardingly who they were smashed (literally) by in the first game of the season all the games this season were competitive and close, and the U16A enjoyed 3 satisfying wins out of 7.  Should have been 4 as the SVS game was so close – such a shame as girls played brilliantly and deserved to win. Led admirably by Atlanta Anley, the large squad always rotated fairly and huge improvement with all players was witnessed. 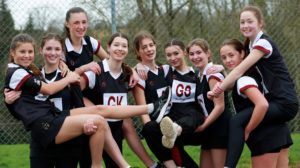 MVP – awarded to Korede Majekodunmi for her versatility of position when required but also for her consistent shooting and availability to receive a variety of feeds which keep her opponents always on their toes!

MIP – awarded to Orla Reid for her confidence feeding the D and for always being keen to take on board advice and respond positively on court.

Special mention from me to Atlanta for playing up for the 2nd’s as well as for the U16A when required as an excellent defender.

The U16B only played 3 games as sadly 3 were cancelled at the end of the season but they did win 2! Led by ever enthusiastic Jess Beach these girls were a delight to coach and many saw a stint in the U16A as their progress shone through.  Erin Olliver became an extra shooter for the A’s, Grace Parsley stepped up to GK towards the end of the season admirably and Jess Beech would have played up more but with already an abundance of centre court players this opportunity did not often arise.

MVP – would have to be Jess Beech for her unstoppable energy and commitment to the team.

MIP – Molly Sanderson who quietly worked away as a shooter and secured her place as a regular player. 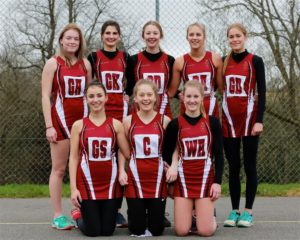 Thanks to Ali Kittermaster for the above photos of the 2nd’s and U16A team. Albums have been sent to all parents of the wonderful photo’s Ali has kindly taken this season.

The 2nd team had the best season for the school in terms of results with a 7 wins out of 8.  They smashed Bedes and comfortably beat KC Pembury, Ardingly and Colfes to name a few. They lost to Kings in a relentless battle with a reduced squad due to injury at the start of the season which was frustrating for all. Led by new addition Charley Brown this is a team with much talent and great consistency.  I look forward to seeing this team push their boundaries next season with their first target of getting to the Kent school finals in the Autumn term!

MVP – Charley Brown for her versatility and high level of skill from playing club netball alongside school netball which we are delighted she has brought to Cranbrook.

MIP – Holly Humphrey for switching from a GS to a GK and learning how to play this position quickly and with much success. 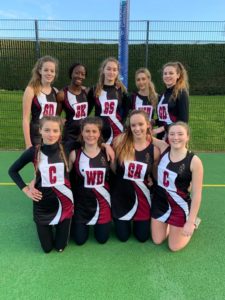 Although the 1st team have found wins difficult to come by, they have enjoyed a great, albeit shortened final season. This group of girls have been ‘netball loyal’ since Year 9 and they have always been a strong unit. They played in the Tonbridge ladies league last summer and won Division 2.  They toured in South Africa last summer and are a team that I am most proud of.  Belle and Jess Withnall as Captain and Vice-Captain both played for the 1st team last year with Belle playing every match as GD and their passion and indeed the rest of the teams for netball is unequivocal. I will miss all these girls and sincerely wish that we had finished the season and enjoyed the end of term celebration that was planned.  However, we will look to organise a future date to celebrate and present awards and colours when life gets back to ‘normal’.

The following receive full colours for demonstrating full commitment and dedication to improving their individual and team performance: 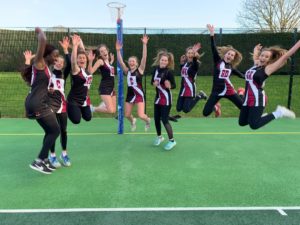 MVP: Belle Withnall as she has worked tirelessly in defence and maintained her motivation and leadership despite the lack of wins.

MIP: Olympia Anley who has always been a most coachable player, progressing steadily and undeniably the fittest one on the court.

Although this season has not been the most successful compared to our previous unbeaten ones, it has been just as much fun. Having started in Year 9 and following through to Year 13, it has allowed us to not only play some great netball but also make some great friends and memories.

Last summer, we even got the opportunity to go on tour to South Africa for two weeks. It was the most amazing experience. We got to play several teams, including playing a local township, we took part in training sessions and were lucky enough to have professional coaching.

Unfortunately, our netball experience was cut short this year, which was of course upsetting but did let us end the season with a strong win! Netball has played a huge role at our time at Cranbrook but would not have been what it was without Mrs Coleman’s involvement. She has been so invested in us since the beginning and has given up so much of her free time, including enrolling us in the Tonbridge women’s netball league every Wednesday evening. We couldn’t have asked for a better coach and we can’t thank her enough. We have thoroughly enjoyed every moment and will miss Cranbrook netball greatly.
Our player’s player is Polly Murphy and most improved from the team is Adeola Oni. 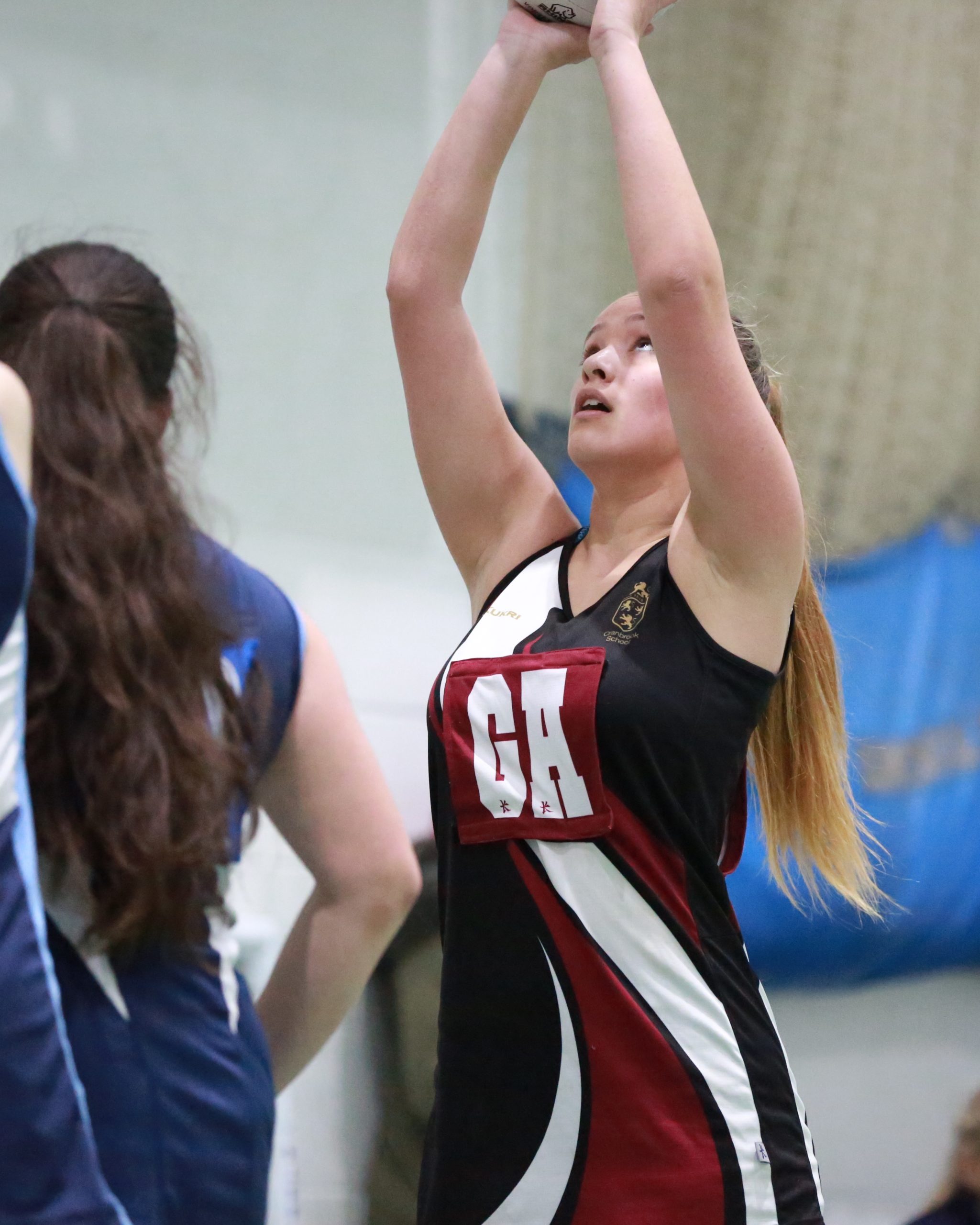