We are sad to announce that former Cranbrook School Headmaster Peter Rowe, passed away on 1st September, aged 92.
Mr Rowe joined Cranbrook School in 1970 from Bishops Stortford College, having been Headmaster there for 13 years. He had also attended Bishops Stortford as a pupil and, following a first class history degree at Cambridge, he was at the time the youngest headmaster in England when he took up the post there at the age of 29. His amiable, enthusiastic and non-patronising approach to young people made an immediate impact when he joined the school
Mr Rowe made a huge contribution to Cranbrook during the 1970s and he will be remembered for his optimism, energy and empathy with students which resulted in a very happy school environment. The ablest arts academic among twentieth century Cranbrook headmasters, literature and music were no less important to him than history and politics. He will be remembered for leading the school through an eventful, demanding and exciting period of development in particular with the introduction of co-education. During Mr Rowe’s headship Scott House was adapted as a girls’ boarding facility, Blubery House was built, science laboratories with a sixth form centre above were created, and the Queen’s Hall Theatre was conceived and constructed, which transformed the physical character of the campus. He and his wife Bridget were houseparents of School Lodge alongside their other responsibilities.
Peter Rowe will leave a lasting legacy.
We send sincerest condolences to his wife Bridget and family. 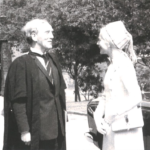 HRH The Duchess of Kent’s visit, marking 400 years since the foundation charter.