On Tuesday 25th February, Old Cranbrookian Victoria Wallace gave an inspirational talk about her work as Chief Executive of the Commonwealth War Graves Commission to an audience of about 150 local people, students, staff and parents. Everyone was struck by the range of the Commission’s work and the sheer scale of the operation. Emotions were stirred too by the stories Victoria told of the huge numbers of Commonwealth troops who are just now gaining the recognition they deserve for the sacrifices they made.

Closer to home, she demonstrated the power of the online Search facility A Street Near You supported by the CWGC to track down long lost relatives and local folk affected by two great conflicts last century. 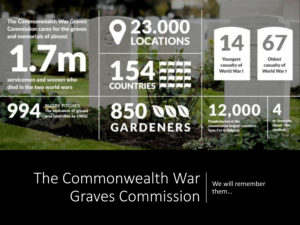