The season for the girl’s netball and boy’s hockey sadly ended early and abruptly due to the government decision to close schools as a preventative measure to combat the spread of Covid 19.  This was particularly disappointing for our 1st teams (especially our Year 13 leavers) as they didn’t finish in the usual celebratory fashion. 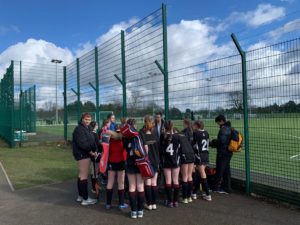 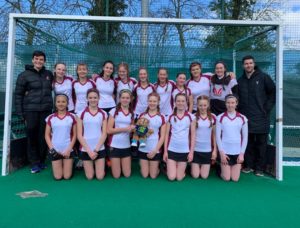 I am very grateful for the below summary boy’s hockey reports, following the shortened season, which were compiled by Craig Morton our lead hockey coach before he travelled home to Scotland. We all wish him well in his new post as Director of Hockey at Radner House School from September.  He has enjoyed his two years at Cranbrook and has certainly made an impact.  In addition to coaching students from Year 7-13 he has worked with staff and gap students to develop their coaching knowledge which has been much appreciated. Craig has really enjoyed the year with the girls and boy’s team’s, however I know that the success he enjoyed with the U14 girls competing at the Tier 2 National Finals in Reading in March was a real highlight and these girls and Craig I’m sure will never forget this experience. A day enjoyed by students, coaches and parents alike, including our wonderful governor Tommo pictured below. 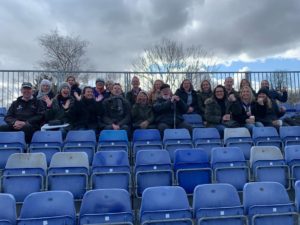 Unfortunately, our final few matches had to be cancelled but this year has all been about development for Cranbrook School Hockey. Our Year 7s have shown they have the potential to be a very strong squad going forward. We had A and B team fixtures against Marlborough House and Skinners. The A team have very competitive games unfortunately just losing out 0-1 and 2-3 respectively. The margin for the B team was a little wider but they showed big improvement between the games.

The Year 8 teams have shown great promise for the future of boy’s hockey at Cranbrook. Our Y8 A team started the season off with a tremendous 3-3 draw against powerhouse Langley Park School for Boys. They followed this up with a comfortable 3-0 win against Marlborough House and a close 2-3 loss to Skinners. Next up for the A team was a trip to Canterbury Hockey club for the U13 Maylam Cup. The boys were not at their best unfortunately, but came away winning 3 games, drawing 2 and losing 2 tough games.

The Year 8 B team had some strong outing against some strong squads. They lost out to Langley park 1-4 and a very close game to Marlborough House 2-3.

Our Year 9 A team have had a tough time in terms of results, but the ability and talent of the squad deserves more. They have played the best hockey in almost all of the games, created the most chances but just missed out on the results. I have no doubt this team will continue to improve and be one of the strongest teams in Cranbrook for years to come. This was highlighted in our last game against a strong hockey school in Eltham College. Due to illness we only had 10 players up against a full-strength Eltham. Our boys ran until they couldn’t run anymore and in the second half created 5/6 great opportunities to score/ equalise the game. It was by far the best performance of the season.

Our Year 9 B team have had a tremendous season. They won 4 of their six games with 1 draw and a tight 1-0 loss. Scoring goals was not a problem when at full strength shown in a 6-0 and a 7-1 win. The B team had a perfect balance of solid structured hockey with some Spanish flair thrown in from the School Lodge boys. The strength of the B team highlights the depth of talent for hockey we have in this year group.

Our Year 10 A team have had a mixed season of results. They play against probably the strongest age group of some of the strongest hockey schools around. This has led to some games were the score line is wider than it should be due to the clinical nature of the stronger sides.  Still there were good wins for the boys against Ashford, Kings Rochester and Skinners. This is a good learning experience for this squad to compete against the best around and it has shown in their improved play.

Our Year 10 B has been much improved from last year and boasts 2 wins and a few very close defeats. The team have a small squad but have worked well together. The stand-out game was an amazing 8-0 v St Lawrence. It is always nice to beat St Lawrence but 8-0 is even sweeter.

Senior Hockey Round Up 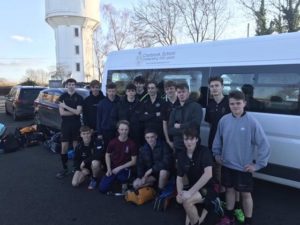 The first XI started the season with a very poor first half against Skinners. We implemented new ideas and had several players playing their 1st team debut. We were 3-0 down at half time. After regaining some composure got back to 3-2 and had chances to equalise. It was a disappointing loss, but we learned from our lessons in defeat. The next game we played a great game vs hockey powerhouse Langley Park School for Boys resulting in a 3-2 win. The boys then swept aside Eastbourne 2nd XI  6-0. This brought the squad to the big event the Frank Mason competition. In a tough group against Kent College and SV the boys finished 2nd which lead to a quarter final against a strong St Lawrence team. We held them out for all but the last 2 minutes crashing out of the cup 1-0. We finished the season out strong with a string of good performances against Judd, SV and Eltham.

Sadly, we were unable to present awards for the year but there will be a presentation at some point in the future.

Player of the year- Ben Errington

Also wishing all our leavers the very best for the future and I hope you keep playing hockey! 1st team full colours for commitment and high performance are awarded to: 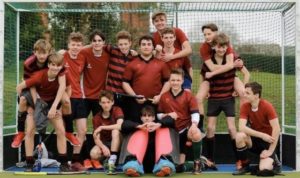 The second XI has had a difficult season to say the least. Our squad predominantly made up of Y11s faced many older and more experienced teams. They have been on the wrong end of some big score lines, but the players have continued to be positive and use it as a valuable learning experience. The highlight of the season was a brilliant 2-1 win against Skinners with Bertie Barwick scoring a screamer against his brother in the Skinners team.

Player of the year – Will Henley

2nd team half colours for commitment and performance awarded to:

Thanks to Ali Kittermaster for the above photo.  Albums have been sent to all parents of the wonderful photo’s Ali has kindly taken this season.

Unfortunately, the hockey season was cut short but finished on a high with a match against the girls. A lot of fun and a close game to bid farewell to the legend that is Craig Morton. The boy’s season was very positive with 6 wins under our belt and only 4 losses against some very well drilled sides. Our only draw of the season came against our local rivals Sutton Valence, a superb game closing at 1-1 but it showed that Bear Pearse should be England level as he silenced Suttons Valence’s England player with ease. The most memorable moment of the season was our win over Langley Park, who are renowned for being a hockey school. After coming up just short last year we stepped up a level and beat them 3-2, with some world class performances from Percy Christopherson and George Kite. Special mentions go to the Year 11’s who stepped up and proved their worth in the first team and we wish them luck in the future. We say goodbye to the Year 13’s who have served well throughout their Cranbrook career. MVP goes to Ben Errington who has been banging in goals since year 10 for the first team and he thoroughly deserves it. Players’ player goes to Olly Addis for simply being class and deserves to wear the England badge again. Most improved goes to two players who really stepped up this year – Maximillian Bright and Anthony Williams. Special mentions go to Callum ‘Rowboats’ and ‘Huw Bear’ for being legends of the game. Cranbrook will massively miss Craig as he was an immense coach who genuinely cared about the team and took us from strength to strength each game. We wish him well and he will do very well at his new position as Director of Hockey at Radnor House School. Not only have Cranbrook lost Craig, they have also lost Percy Christopherson. Percy has been the rock that kept our team together this season and played with ease and grace. His efforts each game can never be faulted and will be sorely missed by the sporting staff at Cranbrook as he is quite simply ‘Perfect Percy’. Hockey at Cranbrook has been an integral part of my Cranbrook career and I will sorely miss it. Thank you, Cranbrook, it’s been a blast.