A kitchen can be a stressful place to work, especially in a school. Our head chef, Mr Edmonds and his colleagues, do an amazing job when it comes to getting the students of Cranbrook a meal on their plates.

Whilst we think of the kitchen being stressful and hot, it is also very dangerous. Mr Edmonds had a serious incident in the kitchen. ‘ whilst we were cleaning the remainders of lunch mess in the kitchen, a container full of 180’C boiling oil spilled onto my feet, I was in hospital for weeks’.

They have to take extreme precautions about food hygiene, if one of the students gets food poisoning from their meal, the kitchen will be held responsible. For each case, the kitchen would have to pay £20,000, or face 6 months in prison! If 10 pupils got sick, the fine would be £200,000, or 5 years behind bars, which isn’t very convenient!

The kitchen’s annual budget is £360,000, but they earn more money for supplying the boarders and other schools with food.

Mr Edmonds legally has to put up posters so that students know and can tell the chefs what their allergies are.

Mr Edmonds and his second chef sit down every term and look at trends/catalogues to create a new menu.

They always try to change the menu every term. 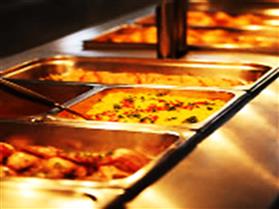 This is an example of Cranbrook’s delicious food

He agrees that he has a very generous budget. They also have top state-of-the-art equipment to ensure maximum safety and efficiency.

The canteen gets a lot of plate waste from people that decide to pick a meal or pudding and just leave it. Around 2% of food and money is wasted. The trouble is, the chefs do not know how much food will get eaten so sometimes food runs out and sometimes, it is wasted. The Cranbrook kitchens have a waste disposal system, and then it is transferred into the sewage system.

Mr Edmonds knows that there is a problem with the plastic cups; however, there is nothing he can do about that at the moment because their dishwasher cannot clean over 700 hard plastic cups or glasses. The school recommends bringing in your own bottles so there isn’t as much waste and it will cause less marine life to die.

Working in Cranbrook kitchens is ‘enjoyable and exciting; we are working on reducing the waste and in the slightly longer term, working on our plastic cups. ‘I love working in this community, otherwise I wouldn’t have been here for 13 years!’ quoted our head chef, Mr Edmonds. 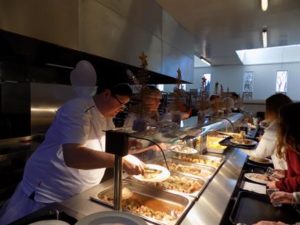 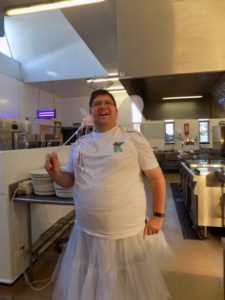 Mr Edmonds in his Christmas outfit!