It has been a busy end of term for the school boat club with a series of indoor races and final water sessions on Bewl Reservoir to sign off the term. The Rowing Club now has about 26 members on the books who take part in either water sessions on Wednesday and Saturdays and/or fitness work and gym sessions during the week. The club is supported by Bewl Bridge Rowing Club who allow us to use their equipment and coaching boats which without none of the water training would be possible. Parent and Captain of Bewl Bridge Rowing Club Rob Miller remains a huge supporter of our endeavours giving up huge amounts of his own time to coach, drive, support and work hard behind the scenes to ensure that the Cranbrook rowers have everything they need to enjoy the sport. It is Rob Miller’s hard work and generosity that has made much of what the school has achieved possible. 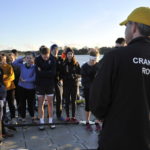 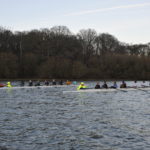 Eva, Sos, Bim, Milo, George and Tom were a total credit to the Cranbrook School at the Sunrise 2 Sunrise . They worked tirelessly all night. Their self-motivation and commitment to the cause was exemplary and their total of 158,467m was an excellent demonstration of their athleticism, determination and tenacity. 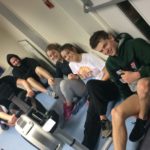 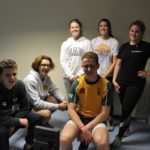 You can view the full details of their achievements in the downloads section.

On Thursday 6th December a team of 12 rowers participated in the regional West Kent Indoors rowing championships in a bid to qualify for the region and race at the Kent finals next year. The boys team who consisted of George Slack, Alex Pavelko, Conrad Maciborski and Tom Woolgar raced superbly well notching up some personal bests on the individual rows before pushing hard in their relay event as a team of four. The boys secured a third place position finishing closely behind second place by only 4 metres. The girls teams of firstly Lucy Stephenson, Sos Stevens, Millie Lang, Mathilde Stone and secondly Bim Carnwath, Maddie Young, Eva Roche and Emma Gledhill performed well against some tough opposition but pulled through to achieve a hugely commendable 2nd place for the first team and 5th place for the second team. For some girls this was their first taste of indoor racing and with all scores being close together it makes for some good racing in the future. It is highly likely that both the first girls team and boys team will indeed qualify for the Kent finals as we did last year. Well done team!

This has been an exciting event for us in the past where we have won, for two successive years, the Junior Mixed Relay event. As the years have passed however what started as a smaller event has now become much more competitive and popular with many of the bigger rowing schools throwing their rowers in to take the available titles. Last year was a very close win for the Cranbrook team. This year we knew it would therefore be tough and we entered two teams of George Slack, Alex Pavelko, Eva Timlin, Sos Stevens  and Tom Woolgar, Conrad Maciborski, Lucy Stephenson, Mathilde Stone. Both teams raced superbly well actually rowing further than last year’s winning team but on the day competition was tough and there were some huge relay teams that had the physical edge. Cranbrook came a respectful 5th and 7th  out of 14 team entered. The standard of racing was very high and it was very close contest between the top 5 teams. Cranbrook were actually in podium position with a minute to go but a poorly timed final rotation of rower possibly cost us a stronger finish. Having said that the teams rowed really well and had clearly given everything by the end of the race. The whole day’s event attracts almost two thousand competitors from all walks of life and it was great to see Cranbrook students representing their school so well.

It was a fitting sight at the end of term to see the school Boat Club field two mixed eights for our final row. Rowing is a slightly different discipline from sculling (and what the rowers have done for most of the term) but it was indicative of the progress the rowers have made that they could jump into the rowing boats and be able to row so well. One of the boats was Cranbrook’s new acquired eight that the students loved to row in and will, I have, no doubt soon be seen racing in the New Year. Both eights had time to get use to the conditions before racing side by side over a short distance. It was hugely rewarding to see two Cranbrook eights on the water and rowing so well together. I hope this is a sign of good things to come.