By Lily, Chloe, Harrison and Barnaby

Has graffiti lost its meaning?

On the 25th of June we went to School House to interview Dr Warren about the graffiti in his flat. The graffiti went back to the late 19th century to very recently; it was used as a boy’s boarding house with under 50 students. The graffiti consisted of names of residents and dates of when it was etched into the wood. It was hidden on the inside of a cupboard door. Mr Warren, a current resident of the School House said that his favourite was the ones which were written in the period of the First World War (1914-1918). Some examples of the names are G.Hawk-1916, Watson.June.16.1902. 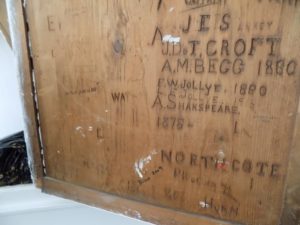 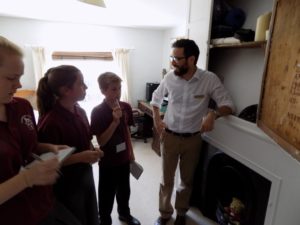 Some of them are actually quite recent for example L.Martin-2005. Although the School House was not home to any boarders in the 2000s, it was, until recently a sanatorium (which is a type of medical centre) we asked Mr Warren why he kept the graffiti and didn’t cover it over, he replied with, “it is very traditional and I like how it has different stories for each of the engraved names, the fact that some of them had been written in WWI and the boys would have been sent off to war.” He also spoke about how he liked living in an old house/apartment because of the way it gave a presence of the history and past.

Mr Warren also commented that he would love to find out more about where he lives and the history of it. This led us to agree that the word, graffiti has changed its meaning over time and actually 200 years ago it was a way for students to leave their mark on Cranbrook School and a way of appreciating their time here. Though in the present time the word is now seen as vandalism and a bad thing that should not exist. This evidence proves that over time meanings can change and points of view are varied.